The manufacturing of a Special Rope Trailing Line
from Natural Fibres.

The traditionally close connections between ropemaking and kite craft...
Below, see a typical ensemble of that profession, presumably in the middle of 18th century

The picture is showing a boy with his shouldered pear-tip"-kite  (French origin) and his kite-line wound around a stick under his right arm. Hard working children were a normal fact in those times. So a child is sitting in the background turning round the ropemaker's wheel the whole day long, for the worker could spin a thread from the stock of hemp he's  holding in front in his apron. Obviously none of the pictured persons is possessing shoes! The thread lies on a "ropemaker's-rake" for it doesn't get dirty by hanging on the ground, an important thing considering long rope lengths! Also visible a little wooden vessel with a liquid for smoothening the rope's surface and a big wooden vessel with water. On the left side in the foreground is lying (a little bit untypical on the floor...) a reel with a ready made rope.

Since dark prehistoric times, the manufacturing and use of ropes made of natural fibres is a well known craft. In fact, it's one of the oldest technologies of man as shown by stone age drawings on the wall of Spanish caverns in the Pyrenees mountains. Those pictures situated at the frontier between France and Spain can be dated back at least 20.000 years in the last ice-age showing climbing men using a rope. A lot of pictures of the use of ropes furnishes the egyptian culture especially concerning the building of the famous pyramids.

In Polynesia even today techniques are used, which seem to be the same, our ancestors were familiar with in stone age, using as a tool nothing but the own body.
Here's an excerpt of P.H.Buck, "The Material Culture of the Cook Islands":
(...) Two-ply Twisted Cords, aho.
Strips of bast of the requisite thickness were rolled as two separate cords on the bare thigh, and then with a back movement rolled together over each other. (...) The ends of fresh strips of material were merely overlapped over the shortening end of another, and the rolling joined them. Very long lines were made for seine nets. (...)
Please see the  two films by G.Koch at the IWF "Herstellung einer Kokosfaserschnur" (silent film sof 1968 showing how a coconut-fibre line is made in Mikronesia showing the "bare-tigh-technique") and also the Book of the American Bishop Museum on Hawaiian Cordage and last but not least Himmelfarb's book considering all aspects of modern ropemaking


Daily, we are still using the "little brother" of the rope, the string, for closing our shoes --- and last but not least for kiteflying.

Therefore, in the beginning of 20 century, synthetic fibres were developed. They have a much better performance; but most of them have the disadvantage---that they persist for at least some decades without rotting. So they are a source of environmental pollution...

The main principles of manufacturing as well as the tools didn't change very much until the last two centuries, when engines began to substitute the work of man.

But the old techniques (see a text on old Hawaiian cordage techniques) are still used in countries, where plenty of manpower is available and engines are too expensive.

When making a simple thread of single fibres, the secret of the fibre's cohesion is their twist. Although a thread made by straight fibres would be of much greater strength, twisting is the only way for connecting relatively short fibres to a long rope. By the way, the ready rope becomes ca. 30% weaker by twisting than the single fibre's sum of strength and its strength is diminished once more (ca.70%!!) if it becomes wet ... 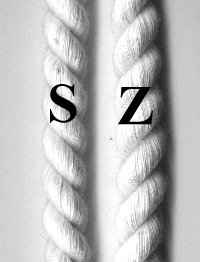 Twisted rope with "right" or "Z"-twist
Please note: the twists of thread, line and the final rope
are always in opposite sense to the next bigger following structure.

In the following chapter I want to present you the special kite-tail system used by the Chinese Whistle-Kites of Nantong. The double trailing-lines stabilizing system is essential for that type of kite, because its a flat kite without any self stabilizing system like for example a dihedral or so.

In flight, those double trailing lines, which are fixed to a "tail-bridle" (obligate!), are characterized by a feature: The lines don't hang parallel to another behind the kite, they even "refuse" parallelity and hang in a upside down "V"-shape in an angle of 10-15°, stabilizing the flight either very effective and decorative .

That strange behaviour causes a curious look on these rebellious tail-lines.
The first look shows nothing particular:

Apparently simple, normal "Low-Tech" Lines, aren't they...?
When having a closer look, the little mystery is solved and I admire again the asian's "kite-engineer's" talent of observation and construction.

The following properties are the explication for the curious "drift apart", which seems to outwit the laws of physics.

These three properties explain the behaviour of the two lines.

When making ropes for other, normal purposes, the ropemaker pays special attention for making a smooth surface in order to minimize friction/ destruction forces on the rope. Therefore the rope is made normally from 3 (-4) strands and the rope is finally smoothened by special mechanical devices and watery fluids.

By making the rope with only two strands, the surface becomes extremely "ribbed" and the air streaming by finds aerodynamic effective structures resulting as a force which lets drifting the ropes sidewards. The opposite twist causes the ropes drifting apart from another or to another, depending the way round they hang.


The following chapter is written for those, who now want to try simple techniques which were faithful compagnons of man for thousands of years since at least the last ice-age...

First of all a few important terms:
The Fibre - is the basic structure of the thread. A fibre is in the following the maize straw/ raffia, hemp etc.
The Thread  - is twisted from fibres. Without a twist, the fibres wouldn't connect and fall apart.
The Line - consists of (again) threads twisted around another.

When making a rope for a single-line tail, only few things are required:

That's all you need for the old, simple technique of rope making.

If you replace the hook No.1 (non rotatable) by a drilling engine (running right and left) with a hook instead of a driller, the work will go on very fast although a little unsporting... ;-)) . Don't forget, to connect the drilling engine to a long cable with a switch corresponding to your desired line-length. Here's the view of an old simple ropemaking engine, the "Iron Wheel" from 1850, in this article replaced by the drilling engine mentioned above.

The Twisting of the Thread and the ready Line
(showed at the example of maize-straw; the "original material" for the Chinese Nantong Flute Kites being rice-straw)

Then repeat the whole procedure from the beginning (Point1-10) with a TWIST COUNTERCLOCKWISE (=TWISTED RIGHT or "Z"-Twist.) for the second half of the trailing line system!

BOTH trailing lines being ready now will be hanged into the tail-bridle of the kite, because the lines must NOT be distorted.
They only can function (i.e. drift apart in an angle of 15°) if they hang down from the kite in a special manner! If you hold the kite with the face to the wind in front of you and the rear end downwards, the "ribs" of the two lines must come together in wind-direction, i.e.must come together in downward direction. See accompanying  "SZ"-picture! Above is the kite, beneath the rear end of the trailing lines. 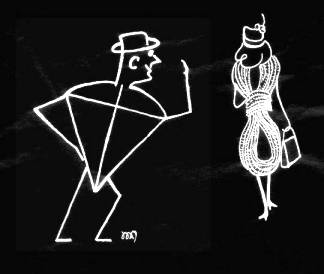 A good flight to you all!


By the way, when you ever come along the French Dieppe- or Berck-sur-mer kite-festival,
don't miss to see:

situated in the North of Rouen, at the N27
in Notre-Dame de Bondeville

the famous
Mechanical Ropemaking Factory
"Corderie Vallois", which was in work from 1820 to 1978.


After finishing its production in 1978, the factory became an industrial museum. The factory is set in motion by a big water-wheel and produces all rope types from ordinary shoelaces up to ship tows.

The technique is simple, martially and LOUD..., there are guided visits with good explanations (IR headset technique) in different languages. The working machines can be watched in a distance of only a few meters. For every kiter (and other...) sportsman, who wants to know the origin of his lines the visit is an absolute MUST!

Some other links to ropemaking sites:

DO you have any questions ?, ideas, criticism or new LINKS concerning the theme?

Then please, give me the opportunity to continue improving these pages for YOU and
write me your opinion, Thank YOU!